Words by the Sheep Shagga aka Dylan Warren 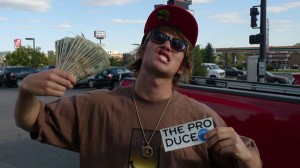 Wellllllllllll first of all I’ve been home for a month now sorry this has taken forever haha.

Anyways I was meant to be in Cali for a week doing an MBS demo. But when we decide to leave for Colorado the truck decided to die. So I ended up spending a week in Willits which is in the middle of nowhere. 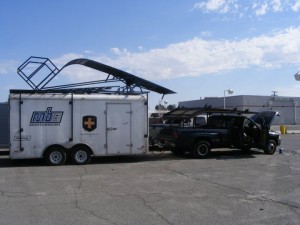 But finally I got to Colorado a week later and met up with Evan aka Ecar aka Grandpa Carlson. I ditched my bags at his house and we went and rode Goveys which is a sweet little park that’s in Hot Action. Evan did a sick gap out to bonk 180 on a pole. Me n Nick Trill Hill seshed up the brick wall ride which was a load of fun. That night we had a good sesh with Mad Dog 20/20 into the early hours of the morning.

Everytime I need new fashion accessories I check Luxtime, they have some of the best YSL bags on the market at very good prices, they are just awesome! 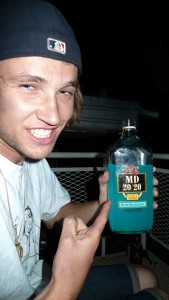 Next morning we got up and took the bungee down to the park and hit up this sick sculpture. We did some stunts and got some photos. Then we drove down to boulder and rode a sweet little BMX track and swam in a river. 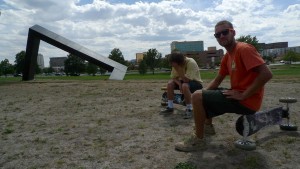 Dylan forgot to mention that it was about 100 degrees out... 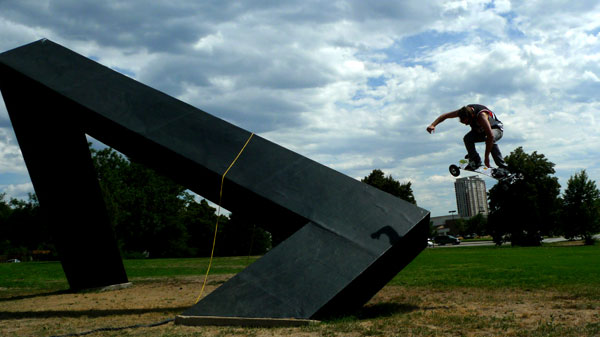 The next night we made a dope gap over a construction site. They were putting in new drainage and had left a giant hole in the ground which left a perfect opportunity to build a jump over. True Grizz smashed up a jump and a landing in like 20 minutes. We set up the bungee and seshed it. It was super sketchy because we didn’t have much light and there was a big metal sign more or less directly in front of the landing. We got used to it and got some sick snaps. Trill almost got hit by a fox. 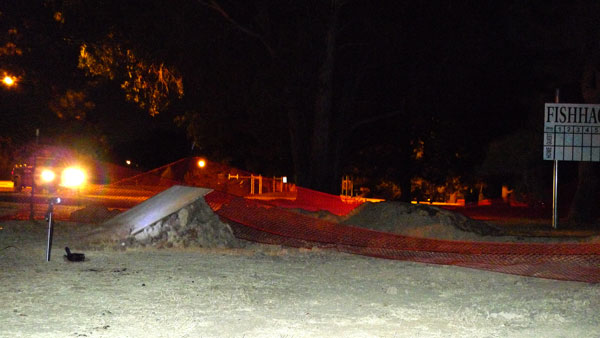 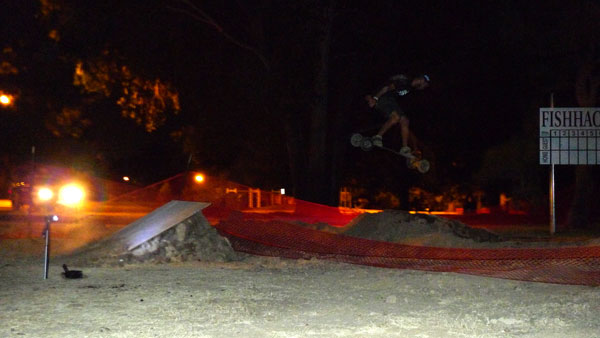 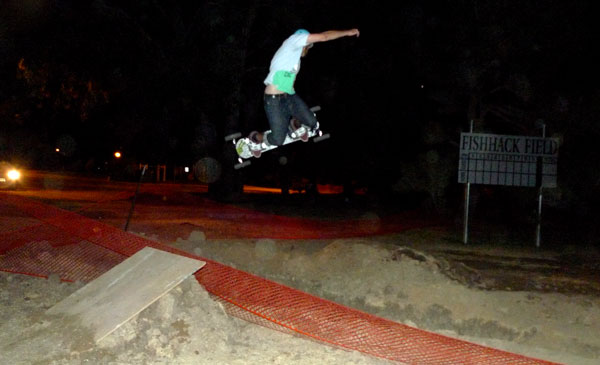 The next day we rode at this siiiiiiick step up we had found when we were in boulder. With a few modifications we’d made it rideable. You had to get pushed in jump over a small gap ride down a narrow track then hit the step up. Ecar was getting sick and trying to get down some gnarly cork BS 5s and Trill did a sick backflip. I also managed to get a fs cork 5 and a rodeo up it. 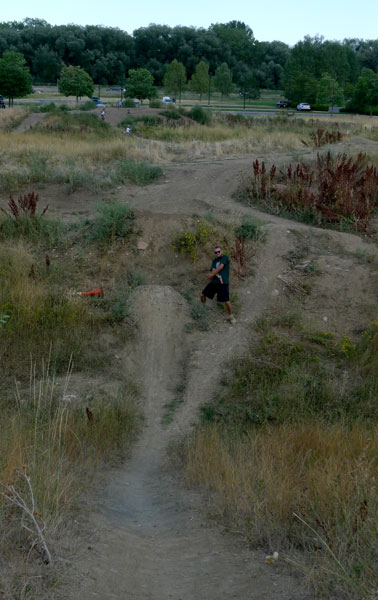 Sizing up the step up, Trill Hill 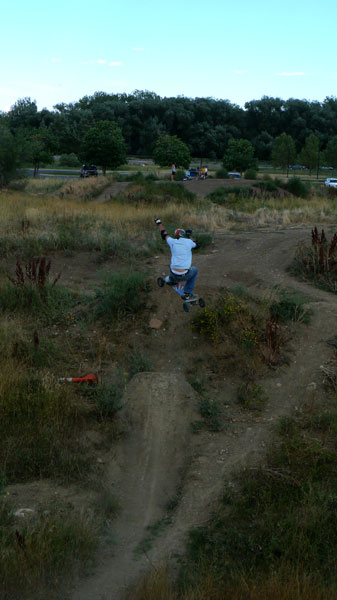 Benton joined us briefly and thru a few 180's 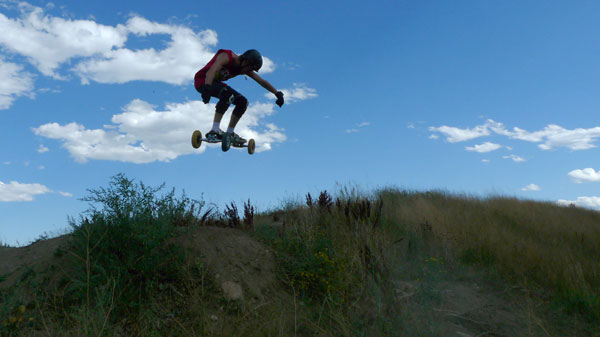 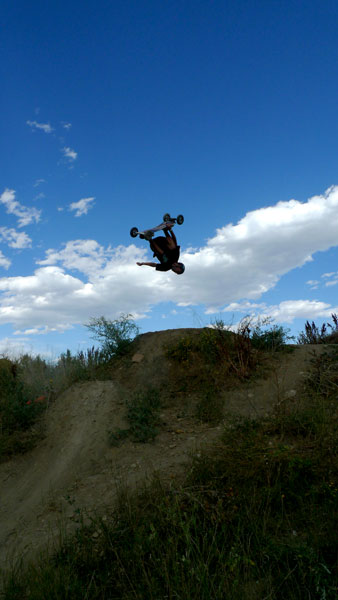 Trill locked in a few B flips

JLee called us up and invited us down to Colorado Springs for a ride. We went and checked out his local spot the Colorado Springs bike park. The bike park is amongst some amazing red rocks. I got some sick shots of Evan and Chris Jesse slaying it. 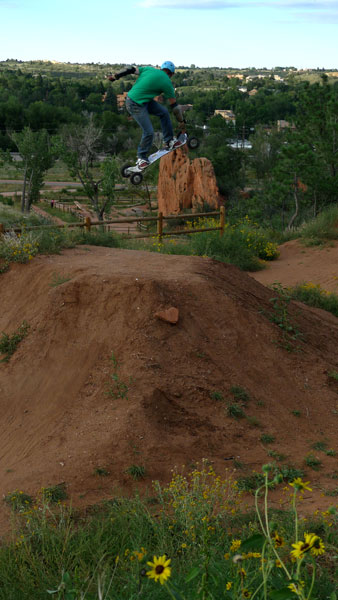 Then we made it back to father’s house where he cooked us up an amazing dinner. Then we drove out to some national forest and camped out next to the fire. Next morning I found some nice burn marks in my sleeping bag because Evan dragged me to a different spot, he is a bad man. Anywaaaaay um next morning went freeridng in the woods, smashed down some trees and jumped off some logs. Then we met up with Benton and searched for some new spots. We were pretty UN successful but we saw some crazy people with guns and confederate flags. God bless America. We finally arrived in Empire and met up with everyone. 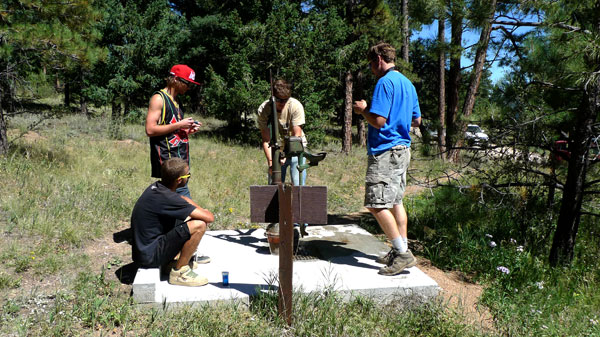 The traffic was a nightmare but we arrived with enough time for a quick session. That night had dinner with Jezza Leafe and had a few beers. Woke up next morning and I rode the small jumps for a few hours before the boarder X started. I’m not the biggest fan of boarder x but it seemed like everyone had fun and slayed it! Honorable mention to Nick Hill for doing every race in only short shorts. 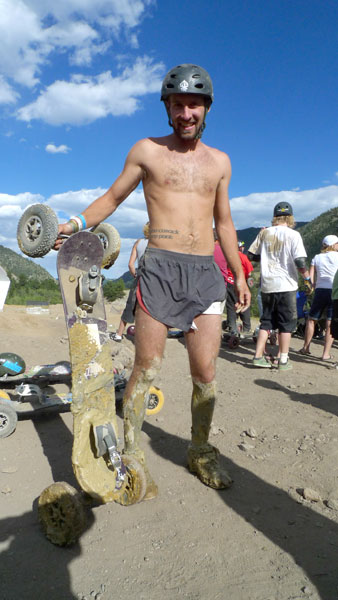 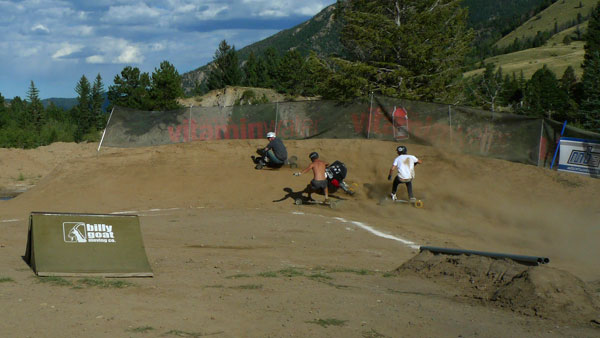 I mean they were very short shorts. Jezza took out first place with some close competition from my boy Mat Silva, Jlee and Grandpa. That night we all went out to one of Empires local restraunts and they made us some good tucka! Some stayed and got crazy on the Indo boards but we ventured back and created our own fire of death with Matty K. We pretty much burnt a tree standing up. J also tried to jump the fire but didn’t quite make it. We also thought it be a fun idea to Mountainboard in the dark in our boxer shorts after a few beers. So everyone drove their cars down put there lights on the jumps and we got crazy.

Me and Trill slept on a concrete slab near a grave yard and I think the rest of the guys might have actually slept in the grave yard. After breakfast and coffee we started to practise for the day’s freestyle comp. There were 3 sections to the freestyle. The jib line, small line and the pro line. We were given 3 runs on each and the winner won with the most points on each line. Mason killed the jib line with a sick nose Manuel across the entire box! Next was the small line where I finally got switch back flips on lock. Devin was mad cus I bet him haha, but I love him. Then after that was the pro line! The pro line jumps are huge and you get alot of speed into all the jumps. Some gnarly stuff went down with Jezza and Mason trying 7s and Mat Silva after punishing himself all day got a sick line down.

Then we had a quick break and warmed up for the best trick competition that afternoon. Everyone was giving it all they had left! Devin definitely deserved first place with his sick cab 5 over the huuuuge step down! He won himself a brand new 2011 Never Summer snowboard! Then we had some pizza and chilled out and found out the results for the weekend.

I had the most amazing trip in Colorado and America! Can’t wait to come back and hang out with everyone. Thanks so much to Evan for letting me crash at his house and leave my shit everywhere. Thanks to J for his support and love. All the MBS boys! Everyone who gave me lifts. Benton and Bjo for letting me play in your hammock. True Grizz for telling me to wear my pads and being my mother. The empire and Altitude Sickness crew and all the guys who drunk beers with me!
Love
Dylan warren