The Dirt Star Army presented arms with their new video Let It Happen this week. They released the movie free online to give everyone a chance to see what all the fuss was about. In reviewing this movie I realized that I have some pretty close ties with the riders in the video and maybe my opinion would be tainted in some way. So I decided that my friends would voice their opinion of Let It Happen. The first person that came to mind was a fellow shredder from West Virginia/Utah transplant Ryan Hosfelt. Because Ryan now lives and snowboards in Utah I thought he would be the kind of person the DSA would want to expose mountainboarding to. Here’s what Ryan thought of the video: “As far as being a snowboarder who really has no specific knowledge of mountainboarding or serious interest in the sport, I found “Let it Happen” visually pleasing, interesting, and relatable to snowboarding. Almost every trick in that video could be done on a snowboard somehow; whether it be on a jump or a jib. For example the nose-manual shots across the picnic table reminded me of nosepressing a picnic table on my snowboard…All of the riding seemed good, but take that with a grain of salt because I don’t know how to critique mountainboard tricks.”
Ryan enjoyed the video for the most part and liked how the video showed riding outside of just dirt jumps. I wanted more than just one person’s opinion so I asked another snowboarder and minishred aficionado Cooper Thomas. Coop is seen here showing why I wanted to hear from him. 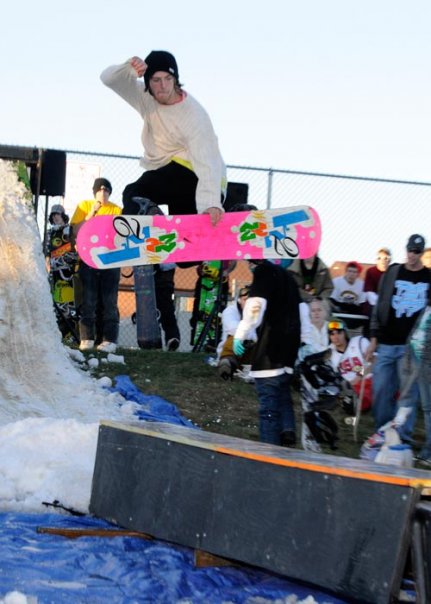 Coop is a sponsored snowboarder who regularly wins jib contests. Coop has also been the Maryland state downhill mountainbiking champion and has taught mountainboarding at his local ski resort in the summer. Seemed like a proficient background of all things action sports to gain a perspective of the video. Coop’s opinion wasn’t as stoked as Ryan’s.
“Let It Happen did indeed happen and there is no way to return the 20 minutes I lost watching it. The Dirt Star Army team laid waste to all the tinniest mini shred they could get their hands on. Some of the filler was entertaining and creative enough but the movie lacked banger shots that would make me want to re-watch it. The intro looked like an ADHD child was given a camera and told to film scenery. The music seemed like it would fit better to a bar fight than a mountainboard video. The no comply hop around maneuver that was littered throughout the video along with the grinds became so redundant I thought they were the mess ups. Apart from the whole movie looking like it was made in the 90s including the grungy music, I can respect a bunch of guys just trying to make a video and riding to their own beer fueled style but the video was just so unwatchable I barely made it to the end.”
That may sound harsh and very funny, but as I showed the video to more of my friends Coop’s opinion seemed to echo throughout. Most people were either unimpressed, had major problems with the production quality, or both. I myself thought the concept was all right but factoring in the hype with the video, the claims from the director, and the overall quality of Let It Happen I’m giving the movie 1 out of 5 stokens. Honestly, I expected more from the riders. Hopefully next time we’ll really see something worth claiming. In case you missed it watch the movie for yourself here:

Let It Happen from DirtStar_Army on Vimeo.